Birdsong, Vets and Neighbours: The Chaotic Order of Farming

On Thursday (19th August 2021) I had to help with the second part of the TB test. It began quite smootly. Dad's workman (Davey) and I got the 13 animals in from the field and all the while the birds were singing. You never really heard birdsong in Manchester so it added to the beauty of the green countryside. The seconed part of the test is usually the easiest but today all the animals had to be given pour on and some bulls had to be squeezed. Not too much extra I thought.

The vet came late which and Davey could not stay any longer so I was on my own with the vet. She had not been told that the anmals also needed vacinated for BVD, so she had to go back into town to get the vacinations. I began to think that the morning was not going to join the harmony of the birdsong in any way.

Whilst the vet was away I went into the house and began tidying up the kitchen from my Mum and Dad's breakfast. At least I could bring some order to something. But before I had finished washing the last porridge pot the vet was driving up the lane promting my Dad to tell me to go outside. But for better or worse I fought back. I wanted to finish what I had started. Nothing worse would come of it. Thankfully it didn't and I stayed calm.

The vet then asked if the animals were about to be put to the bull or AIed. When told they were already in calf she explained that the animals could not be given the vacine as it would not work. It would not protect the calves from BVD. So we were given the vaccines and told to use them next year. I was given a lecture about when and how to use the vaccine. I lecture I had no interst in or desire to remember.

The older animals were seen to and it only left the young bulls. However when we got round to them one of them was stuck in a gate. It had tried to get out of the cursh Davey and I had put them in and had only succeded in getting half way. We tried to push it out but with no luck. I assisted the vet in squeezing the other bull that was in the crush and by this time the vet had to leave as she had another test to go to but could come back at 3pm. There I was stranded with a calf stuck in a gate, with bulls needing squeezed, a father who was not fit for any manual work and no motivation to stay and wait to see it all panned out.

Dad called Adrian, a neighbour of ours, for help but sent me to find a plug socket that worked as we thought that we would need to cut the calf out with a angle grinder. I found the clippers that dad told me to test the nearby plugsocket with but they looked so old and worn that I did not know if they were the right ones and if they even worked. After several atempts they did not work. How were we going to find power? How was the calf going to get out? How long would I have to wait unitl the vet came back?

Adrian came and got the calf out without needing to cut the gate. We squeezed the bulls without anyone dying or braking their jaw. I felt useless, but thankful.

Dad and I got the animals vaccinated. Him pointing out where to put the needle and me trying my hardest to inject the animals with ease. I then got them out to the field. I thought there might not be enough grass as they were hard to get in but Dad thought there should be enough.

And so everything was back were it began. The cows in the field. My Mum and Dad in the house and me bewildered at the chaotic beauty of it all. It did not seem perfect or well planned or how you would want a morning to go, but maybe it was more like the birdsong than I thought. No obvious beginning, middle and end, but a flow of opposing forces that leads to a grander narrative in the end.

"Establish the work of our hands," 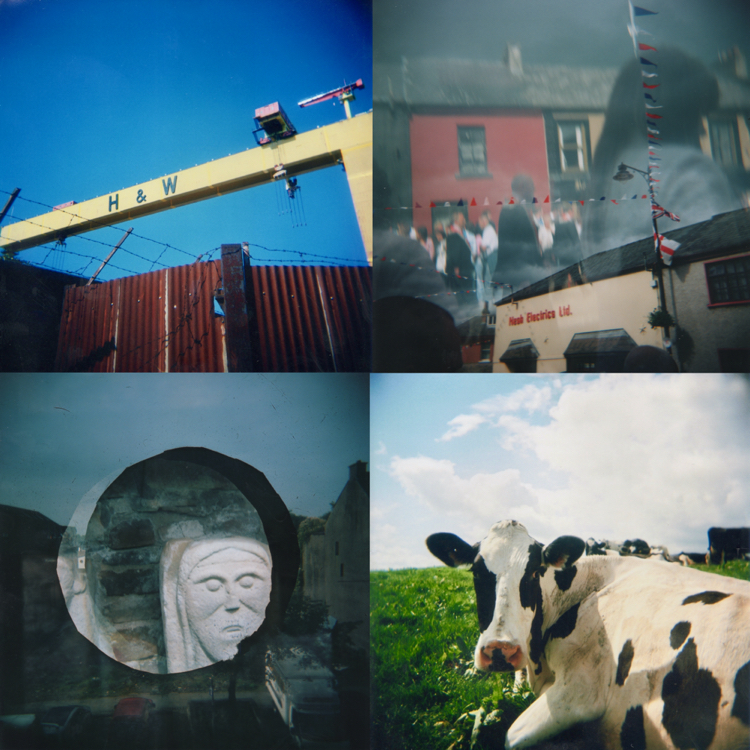 Here are four photographs that I took when I was a teenager with my Holga camera.

These four photographs begin to describe my life growing up in Northern Ireland. The first is of one of the famous Harland and Wolff cranes in Belfast - where they built the Titanic. The second was taken during a 12th of July parade in a village called Kesh - one of my paternal grandfather was originally from Kesh. The centre of the third is of a carved figure from the ruins of an ancient church on an island near where I grew up called White Island - there are many old Christian monastic sites in the area. Surrounding the photo of the figure is the view from my window when I studied in a village called Limavady - it was my first time living away from home. The fourth is of a cow on a sunny day - I grew up on a dairy farm.

I have just begun to learn about web development. Hence this website. I have learnt basic HTML and some basic CSS. It is all very interesting and I am finding myself looking at websites, magazines and evening builings and wondering how that could be re-created in CSS. I have been using MDN Web Docs from Mozilla to learn so far and I have found it very challanging and rewarding.

My name is Reuben Loane. I am a Christian origianlly from Northern Ireland currently living in Manchester (England) and married to the wonderful Dee. I am a stop-motion animator by trade but also love photography, baking and writing. I enjoy watching a good film or TV show with friends and reading a good book before I fall asleep. I occasionaly go climbing and often get around by bike.